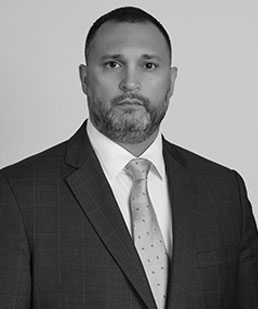 In Mr. Montalvo’s federal criminal defense practice, he defends his clients against charges of criminal wrongdoing under U.S. law, including in white-collar, fraud, conspiracy and other felony cases. Directly and through local counsel, Mr. Montalvo litigates in federal courts throughout the United States while fighting for his clients’ constitutional rights.

Mr. Montalvo has also advised American and Afghani companies in all facets of business development and legal compliance, including contracting with the U.S. federal government. In so doing, Mr. Montalvo brings to bear not only considerable legal expertise but also substantial experience as a serial entrepreneur and business founder.

Mr. Montalvo’s military administrative law and criminal defense practice builds on his 20+ years of faithful active-duty service in the United States Marine Corps as both a military prosecutor and defense counsel where he continues to litigate high-stakes cases. Mr. Montalvo previously served as Special Assistant to the U.S. Attorney at Parris Island while representing the U.S. Department of Justice in criminal proceedings before the United States District Court for the District of South Carolina.

Mr. Montalvo retired as a “Mustang“ Major after being deployed with the 1st Tank Battalion in support of the Gulf War where he received his combat action ribbon. Additionally, he deployed to Iraq with the Second Marine Division in support of Operation Iraqi Freedom. While on duty in 2005, Mr. Montalvo served as the Detainee Operations Legal Adviser for the 2nd Marine Divison and II Marine Expeditionary Force in Ar Ramadi. Mr. Montalvo also served as the sole military prosecutor for the Division, prosecuting over 40 cases involving office misconduct, national security, security clearances, military discharges, Law of Armed Conflict violations, aggravated assault and espionage. He currently maintains a Top Secret/SCI security clearance.

After graduating with honors with a Bachelor of Science in Business Management from the University of South Carolina, Mr. Montalvo received his Juris Doctor with honors from the Temple University School of Law. While pursuing his law degree, Mr. Montalvo served as a judicial clerk for the Honorable Nitza I. Quinones Alejandro and interned with the Legal Clinic for the Disabled, the Camden Public Defender’s Office and the Philadelphia District Attorney’s Office.